Homebuilders aren’t keeping up with millennials

You are here:
Lending 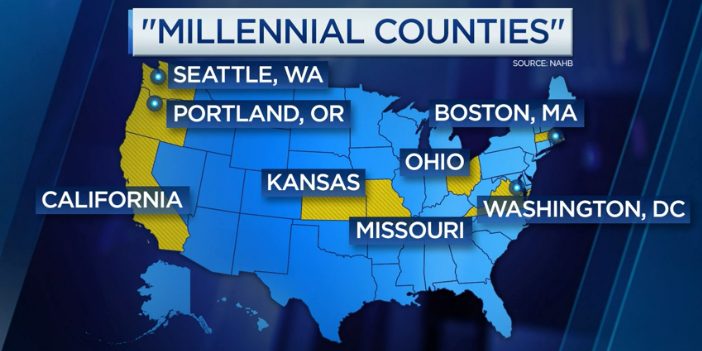 Millennials will surpass 50 percent of all home mortgages in 2020

That generation is expected to be the largest single cohort of homebuyers next year, but the nation’s homebuilders are not keeping up. This is already exacerbating the shortage of homes for sale and for rent nationwide, but will especially hurt affordability for millennials (those born between 1981 and 1997).

While the majority of both single- and multifamily home construction is in millennial-dense counties, it actually lags the rest of the nation when it comes to meeting demand. Millennial counties, defined as geographic areas where at least a quarter of the population consists of this demographic group, account for 62% of the entire U.S. population, but they account for just 59% of single-family homebuilding, according to the National Association of Home Builders’ Home Building Geography Index, or HBGI.

“On the surface, these numbers look similar, but you would expect the single-family construction share to be higher in millennial intensive areas, which tend to feature greater amounts of household formation and population growth that require additional housing,” said NAHB Chief Economist Robert Dietz.

And it’s not just in urban areas. Millennial counties are of course in big markets like Seattle, Boston, Portland, Oregon, and Washington, D.C., but also in rural parts of Ohio, Kansas and Missouri. Homebuilding is still nowhere near its historical levels, nevermind today’s very strong demand. Much of that is due to higher costs for land, labor and regulatory compliance. It takes much longer to build homes now because of the acute labor shortage in the construction industry.

Multifamily construction in millennial counties, which accounts for 80% of all apartment activity nationwide, is picking up but still slower than the national pace.

The shortage of homes for sale is most acute on the lower end of the market, where millennial demand is highest. That has caused home prices to overheat in that category, while prices are actually moderating in the move-up and luxury markets.

Millennials, overall, have waited longer than previous generations to become homeowners, but their share of new mortgage originations is expected to top 50% in 2020, according to a recent forecast from realtor.com. Given the acute shortage of entry-level, existing homes for sale, millennials may turn more to new construction. Without a ramp-up in production, affordability for this generation will only get worse.

New Credit Score System Might Make It Easier to Get A Mortgage
April 16, 2019
Raving Clients

John Digges and his team are amazing. I know you already know it.

I’m a happy client.  I was referred to John by my realtor.  I’m very happy to have worked with him.
Carone

Laura from Fallbrook, CA
(5 of 5)
Recommended! Reviewed: October 8, 2019
Grateful to Justin Thomas Bledsoe! I am now on my 2nd week in my new home. It feels like a dream, and is a dream come true. I never thought I would own my own home. At 46, I am now a homeowner thanks to Justin. in the beginning when my honey and I applied, Justin told me on the phone that I could not be pre-approved, I just did not have the credit. I was crushed and had already done quite a bit of credit repair in a short period of time. HE CALLED ME BACK WITHIN AN HOUR TO TELL ME HE FOUND A WAY TO GET ME APPROVED! I was astounded!!! I cried a 2nd time that day, this time with tears of joy! Buying a home is a grueling process, and Justin was there to support me every step along the way. I HIGHLY recommend Justin Thomas Bledsoe to anyone who is buying a home or refinancing. NOTE: We did not close on date promised due to documentation on my end, not due to Justin.

Loan Officer Review:
Malinda from Sun City, TX
(5 of 5)
Recommended! Reviewed: February 2021
Justin Bledsoe made the impossible, possible Justin Thomas Bledsoe was the most genuine loan officer I have ever worked with. He was very thorough and responded quickly to any questions I had during the loan process. This man deserves a raise! Thank you Justin!!!!!

Nikolyn from Greenacres, WA
(5 of 5)
Recommended! Reviewed: November 2, 2019
Great customer service! We recently closed our loan with Justin Bledsoe and we had the best experience as first time home buyers. Justin is a great communicator and we would highly recommend him to anyone in the market for a new mortgage!

Dear Miracle Makers at US Mortgage,
Happy Monday! Just wanted to take a moment to say how much we appreciate all of you and your speed in making our mortgage a reality! We woke up for the first time in our new home yesterday! The light comes through the windows and makes the whole room sparkle! Today was the first day we woke up that everyone had to go to work or appointments and I literally rolled out of bed and starting walking in the wrong direction because I forgot I AM AT MY NEW HOME! Our first night we took a dip in the jacuzzi and looked up at the sparkling solar lights from our master bedroom terrace and it literally took my breath away! We now have a closer idea of what it means to die and go to heaven as that’s what happened to us! Even our youngest daughter has said “this is my dream home and our forever home and I almost forgot we ever lived anywhere else ever!” This was so comforting because we have literally lived in 5 houses over the past 6 years and she has been asking for us to just stay put. Now she understands….we were waiting for the house her momma always wanted! When I catch my breath more I’ll happily write a glowing complimentary review of US Mortgage but feel free to just use this heartfelt expression of our deepest gratitude for now! EVERY SINGLE MEMBER OF YOUR TEAM CAME THROUGH FOR US! We never saw a company respond so quickly to our every inquiry big or small! You were always reassuring and crystal clear as to what the next step was on our yellow brick road to paradise!
Thank you all for helping make this dream home OURS! We are over the moon with joy!
Much LOVE,
Diana S